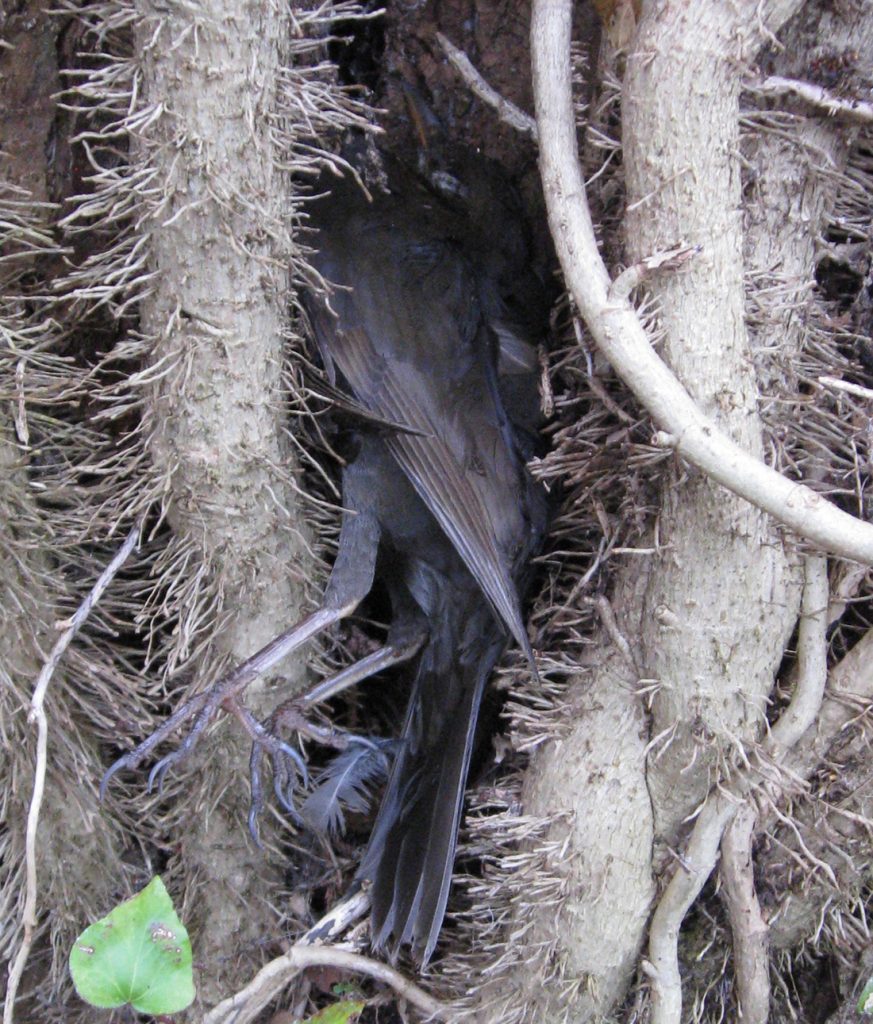 This is such a strange and upsetting story that it has taken me a long time to be able to write about it. It happened on the 10 December 2009 on my way to work.

When I get off the train I walk along a path and there are some trees at the side. I saw 2 blackbirds and it appeared they were fighting. I presumed it was 2 males because they are very territorial. They were flying around each other (close to the ground) and one was chasing they other. (A black cat ran across the path – not sure if this is relevant). When I got closer I realised it was a male and female, at this stage the 2 of them were on the ground and the male was attacking the female. He was pecking really hard and viciously right in the centre of her chest. I am not sure if I did the right thing, but I wanted him to stop attacking her so I chased him off. Normally when you approach birds they fly off straight away, but he did not want to go. I eventually chased him off and she was just lying on the ground in a bad way. She was still breathing, but then her eyes began to close. I picked her up and stroked her chest wondering if I could revive her.

Then she went all floppy stopped breathing and it seemed she was dead. She didn’t seem to have any damage. I didn’t want to leave her on the cold ground so I put her in the hollow of one of the trees. She could have been just unconscious or faking death so I would leave her alone. I was a bit upset and wondering what was going on.

Then afterwards I thought I shouldn’t have interfered, perhaps the black cat had attacked her and the male blackbird was just putting her out of her misery? Perhaps he was trying to revive her by pecking her chest? Its strange because it happened so quickly, one minute they were both flying around the next thing they were on the ground, and she was dead about a minute later.

Initially when I put her in the tree I wasn’t sure if she was dead or unconscious , but when I checked a few days later she was still there and had slipped out of the tree a little bit. I have searched on the internet and can’t find anything out about this anywhere, but it was all rather puzzling and upsetting – she was so beautiful and she died in my hands.

That is very sad. I know they can be territorial but I've never heard of that before. How dreadful. Lx

I have never heard anything like this before and it makes me really sad…blackbirds are such beautiful birds too, thank you for sharing.
/Carolina

Thanks both for your comments, very kind of you. No one seems to know what caused this strange behaviour. Maybe I will never find out.