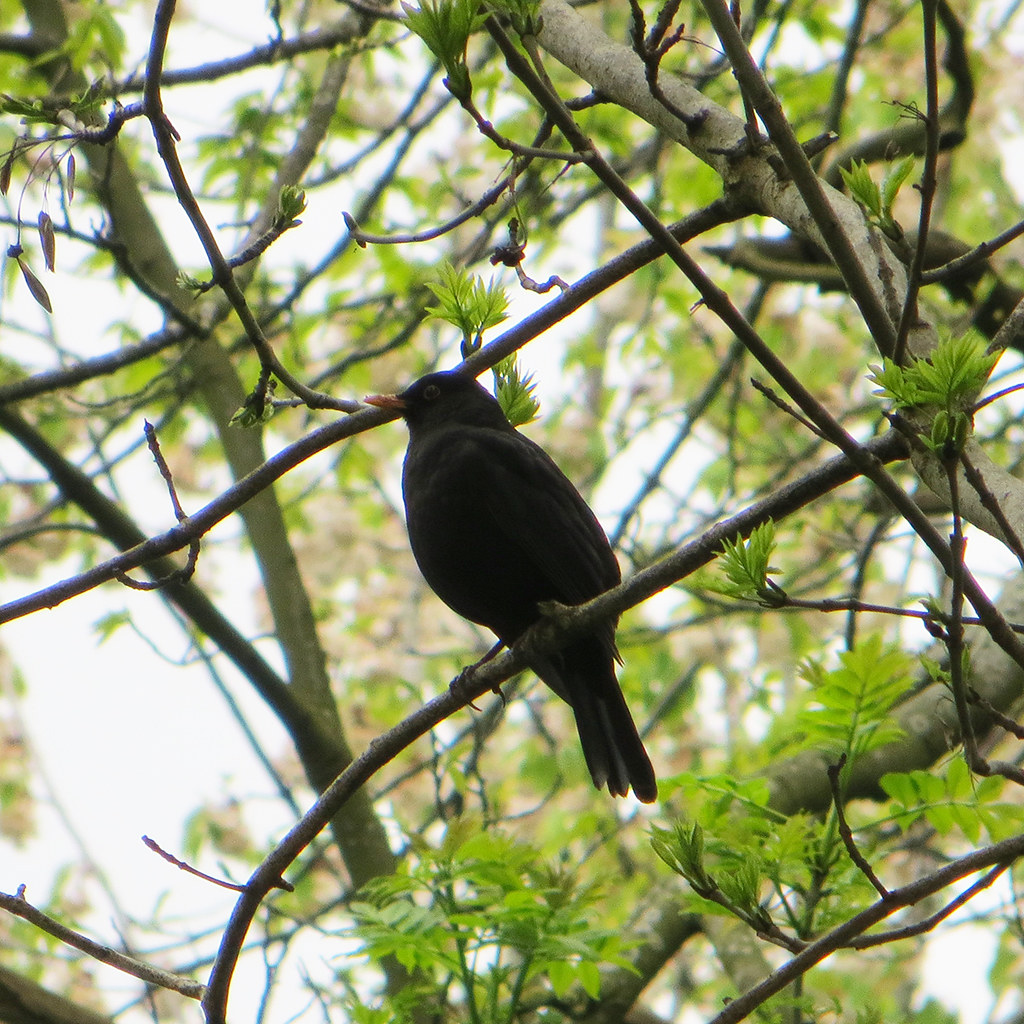 I think I may have found the answer to the Puzzle. I Tweeted (how appropriate!) about this and had a reply from @MarkAvery Director of Conservation at the RSPB who also has a blog Here Mark very kindly took the time to reply to me personally by email, which is very much appreciated and it here it is:

“This is a strange story. But birds are aggressive creatures at times. They do have fights between members of the same species. And they do occasionally kill each other. Usually fights end up with one bird giving in and fleeing. Usually fights are in spring and summer when males of many species (including blackbirds) are defending territories.

December is rather early for blackbirds to be defending territories for nesting but nesting seasons are getting earlier and earlier so it is possible that it is to do with that. The male blackbird may have been defending a particularly good spot for feeding though.

I wonder whether the female was injured, perhaps by the cat or perhaps more unusually by the scuffle with the male blackbird, and because she couldn’t escape she seemed, to the male, to be persisting in threatening his food supplies or territory. By not fleeing, the female was inadvertently sending the signal that she was continuing to threaten the male. So he kept on attacking. That’s the best I can do! Not sure if that fits the facts well or not.

Well the only aspect that I find unusual is that a male would do this to a female – I would expect this kind of behaviour between 2 males. However, this happened during that extremely cold weather we had (in the UK) and if food was in short supply maybe the male was prepared to fight to the death.”

So trying to fit in what Mark said – with what I saw – the most likely explanation is that the cat injured the Female Blackbird. Because she was injured she couldn’t fly off – the male took this as territorial behaviour, and a threat to his food supply, he probably tried to chase her off and it appeared she was refusing to leave and perhaps was challenging him. I am sure if she could have flown off she would have. [This would explain the first bit I saw where they were flying around each other.] So when she wouldn’t leave he decided to attack her, and in her weakened state it didn’t take much to kill her. Thanks again to Mark Avery for taking the time to explain this and solve the puzzle.

So to finish this story, a lovely picture of a Male Blackbird – not the protagonist in the above story!  Just one I took a while ago.

Glad you've received some sort of answer. I tweeted Mark as well and also contacted a zoologist called Mark Fellowes who may also come back to you. I love how our social networks give us access to answers we wouldn't previously have been able to get without a lot more work!
Regards
Mark

At least you have an answer that makes some sense.

The picture is beautiful.

Thanks both, its amazing isnt it. Glad you like the photo Princess.

You're right Mark, I could have Googled myself to death and never found any kind of answer! Thanks for Tweeting about it and contacting Mark Fellowes, I appreciate it.

As I said to Mark Avery I wonder if I want to believe the cat was involved because it makes the male’s behaviour seem slightly less cruel? But the cat was at the crime scene (!) so who knows?

I have a strange story. I just arrived home in my car, and saw two birds fighting on my lawn. I jumped out, clapping my hands, and the top bird flew off. I'm pretty sure it was two female blackbirds. The other bird was still alive – just – but died shortly afterwards. Very weird and sad.

That does sound weird Trish and I agree very sad. It might sound stupid but I still get upset if I think about that female blackbird I saw getting killed. Thanks for sharing your story.

I rescue birds. I have a disabled adult male (raised here) and a disabled young adult female (also raised here).
The male has just attacked and killed the female 🙁 they have been housed together for months. 🙁

It is quite upsetting but nature can be very cruel. It is sometimes difficult to detach our human emotions from this and allow them to get on with their own business 🙂 Thanks for sharing your story and nice to hear someone is looking after these lovely birds 🙂

I just took my dog out for walk and saw a strange sight, a male and female blackbird on their backs and sides dead lying side by side under the bus shelter. I moved them under the hedge as it would scare the school girls so sad. I wondered what killed them no blood or noticeable injuries? I thought perhaps the shock of earthquake or a car, however reading this perhaps they had had a fight.

Hello Rosemary, sorry for the delay. This was an upsetting sight (2 dead birds). Very thoughtful of you to remove them to prevent upsetting others. Possibly it is what you said – a fight and in this case they both died. I also saw something similar at a bus stop a few years ago, but it was 2 dead bluetits which really upset me. That bus shelter was clear glass so I thought they may have flown in to it by accident or if it was very windy they may have been blown into it. Maybe that is another possibility with the birds you saw? All the best, Angela.

Two female blackbirds have had a fight in my garden today, it was very brutal, and even when what looked like the younger one was dead, the other continued to attack it, so I had to remove the dead one, never seen blackbirds fight like this, this near the bird table with plenty of food on to go around

Hello Jane. How strange, I have never heard of 2 females fighting before so looked it up. Did you see this entry in Wikipedia?

“The female blackbird is also aggressive in the spring when it competes with other females for a good nesting territory, and although fights are less frequent, they tend to be more violent.”

The comment has a citation so I’m assuming it’s accurate. Thanks for sharing your story and adding to the discussion. As I said before it can be quite an upsetting thing to see. It also can be very jarring – especially when birdwatching is usually such a joyful experience – we don’t expect to see violence.

I think Male Blackbirds are very territorial, last year one attacked a long tailed tit nesting in our thorse bush and destroyed the nest and eggs and the female bird.
This year we have a robin’s nest with fledglings, I noticed them being fed for the first time yesterday, today I haven’t seen the parent birds going in to feed them, and a Male Blackbird has gone gone into the bush and out again. The bush is quite a small conifer with curly close branches and not usually interesting to larger birds.

Hello Pamela, thanks for taking the time to comment. It is interesting to hear about this behaviour. I never imagined a Blackbird would attack such a small bird – or even see a Long-Tailed Tit as any kind of threat in the first place. I hope the Robins are OK. All the best, Angela.