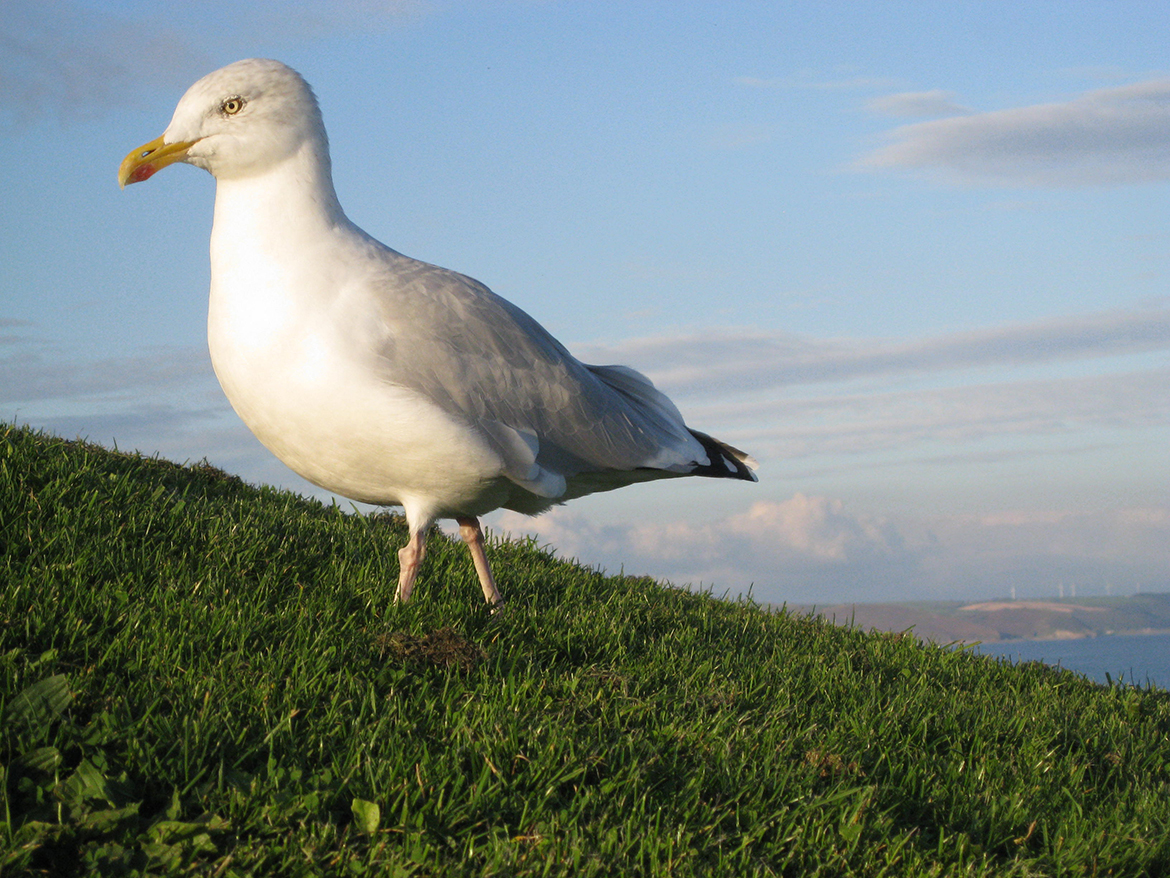 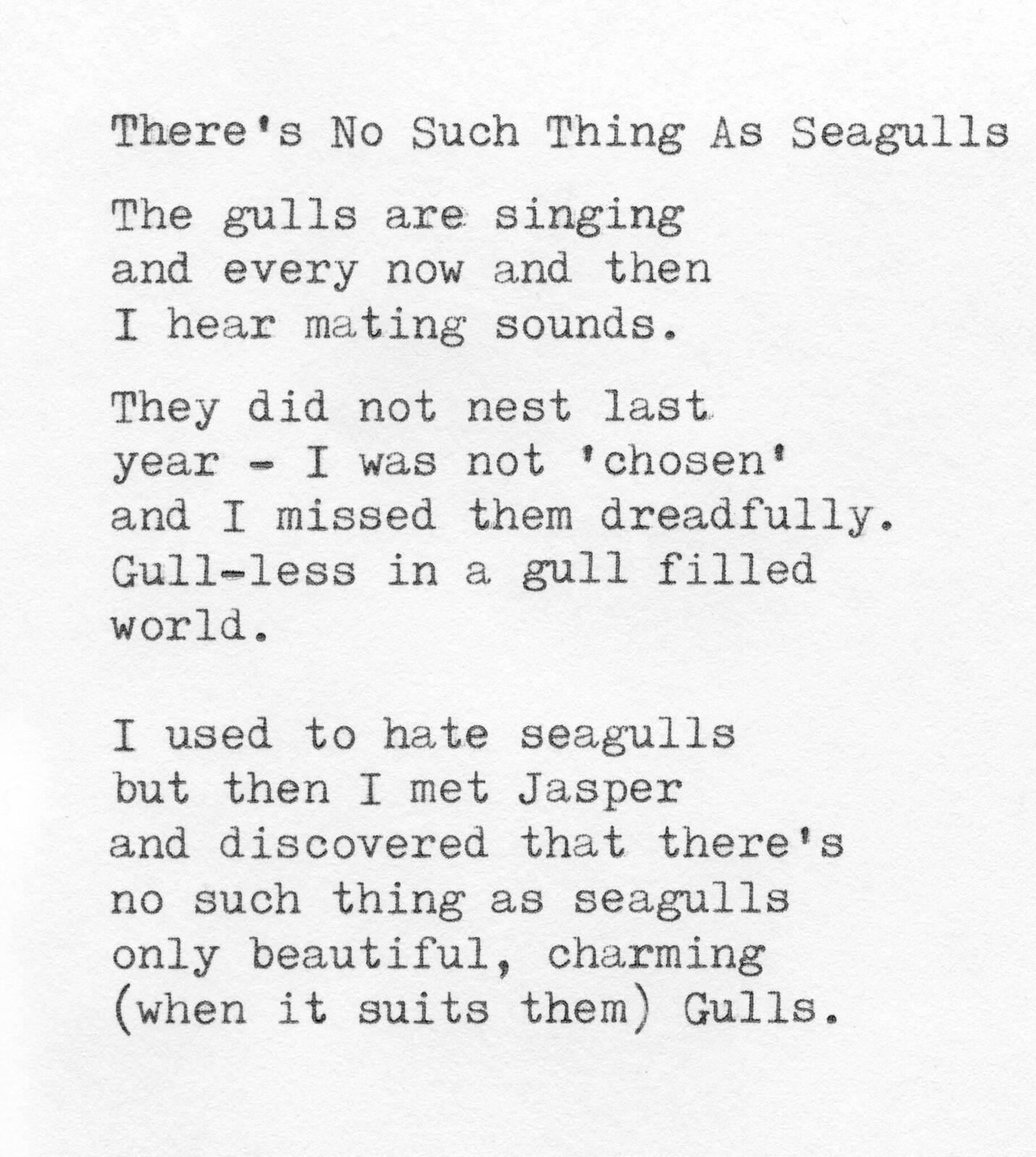 I wrote this in April (typed on my Silverette Silver-Reed Typewriter) and I suppose I should explain it and confess (!) I used to hate Seagulls, they just seemed to be everywhere in Cardiff making a racket all the time. In my previous flat they used to wake me at 6am most mornings. When I used to go to the park there were loads of them everywhere. What are Gulls doing in the park? Why aren’t they by the sea?

Then I moved to another flat and for the last 8 years Lesser Black-Backed Gulls have nested on the roof. There have been various ‘adventures’ with Chicks falling out of the nest, but the most memorable one was in 2005 when a Chick fell down and the parents abandoned it. I rang a local Bird Rescue Centre and the lady said she was inundated with Gull Chicks, she asked if I she gave me instructions was I willing to look after it? I did and the Chick was named Jasper. It is hard to talk about Jasper without sounding over sentimental and over the top. Suffice it to say that the little Gull Chick had a profound effect on me and changed my life in many ways.

They say you have to be careful that you don’t ‘imprint’ on wild animals when you care for them. Jasper did get very fond of me and used to follow me around the garden – the lady at the rescue centre advised me to shoo it away but I could never bring myself to do it. I am not sure if I imprinted on Jasper, I think it is more likely that he or she imprinted on me.

I started to read about Gulls and discovered why they seemed to be everywhere in Cardiff. The first thing I discovered was they are here because of us – meaning because of they we dispose of our rubbish.  It all started in the UK with the Clean Air Act of 1956 and the use of landfill to dispose of waste.

The key event though, was undoubtedly the passing of The Clean Air Act in 1956. The Act forbade the burning of rubbish at tips, instead it required operators to cover the tip face with inert material at the end of a day’s tipping. It was an open invitation to the gulls and populations rose by fifteen fold by the early 1970s.  This sudden and massive increase in gull populations resulted in traditional colonies being outgrown. The gulls had to find other breeding grounds and our buildings, from a gull’s point of view, are little more than cliff-sided islands.    (Peter Rock, Gull-Research .org)

I also discovered that although they seem to be everywhere their numbers are actually in decline. The Herring Gull is Red on the RSPBs Conservation Importance List and the Lesser Black-Backed Gull is Amber. There is not much left for them out at sea but there is plenty landfill and rubbish on the streets inland. They are intelligent, opportunistic scavengers and they are trying to survive.

And finally I discovered that there is No Such Thing as Seagulls. What is a Seagull? There are 10 Species of Gull listed on the British Trust for Ornithology (BTO) Website – which one of these is a Seagull?  The answer is none of them.

It is a pity that Gulls are not as ‘glamourous’ as Birds of Prey or cute and fluffy.  Maybe I am mistaken but there does not seem to be any real concern about their decline, at least there’s no obvious campaign to make people aware that this UK Bird Species (Herring Gull) has Red List conservation status.  They say there is nothing worse than a reformed smoker I wonder if the same is true of a reformed Gull hater?

Jasper Having A Bath

I know quite a few people who think of seagulls as sort of rats with wings, but I've never understood it. Even when they're circling for one's food, they're entertaining. Watching gulls aways makes me feel content.

Hi, just wanted to let you know I'm still following your blog and enjoying it. Just haven't commented in a while. Happy day, H

I wouldn't have been able to shoo him away either. He is such a dear! You are lucky to have Jasper and never mind the sentimentalism or, better still, I thank you for it.

Elephants Child – I have another very good Jasper bath video where he went a bit berserk and fell head over heels into the bowl. The camera action went a bit astray because because I was shaking with laughter. Must dig it out and post it.

Nice to know you are still there Holly and enjoying 🙂

Thank you Ersi. He was a lovely sweet creature and I still miss him.

I rarely see gulls up here, they are mainly down at the Harbour and Marina, about 20 minutes south of us. Here, terns fly along the beach sometimes, but it's generally "birdless."
No shortage of other feathers around the house garden!