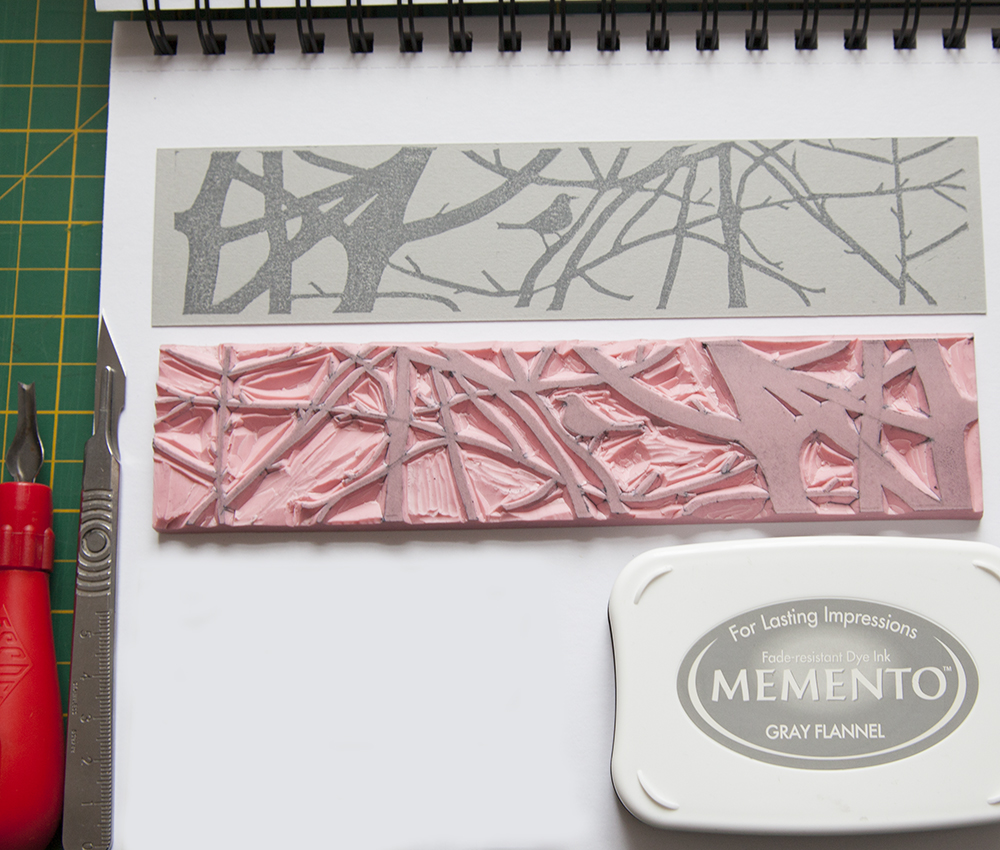 This print has been almost 10 years in the making – if I look at it in terms of the original image used to make it.  The original photograph was taken in 2006. It was languishing on my hard drive and written off because it was underexposed. I stumbled across the picture of a Blackbird in the trees one day while looking for another photo. I had always thought it was too dark and had totally forgotten about it.

The first thing I liked about it was the lovely silhouette and thought it would make a nice banner for my blog (when I was on Blogger).  I liked the idea of a grey silhouette on white so produced this image and started to use it as a banner.

I also really liked the Blackbird itself so extracted that part of the photo and simplified the branch to make another image. I had signed up for a Home Made Rubber stamp course at UWE and wanted some images to take with me. This was the first stamp I ever made. Looking at the dates this was a few years after I had taken the photo because I did the Rubber Stamp course in 2010 – for some reason this image came to mind.

Then a year later I made a book Nest Building Perils & Pleasures (2011). I used the Blackbird silhouette image again for the cover, endpapers and bookband. This was also my first experience of printing onto book cloth using an inkjet printer. There were lots of screechy moments 🙂 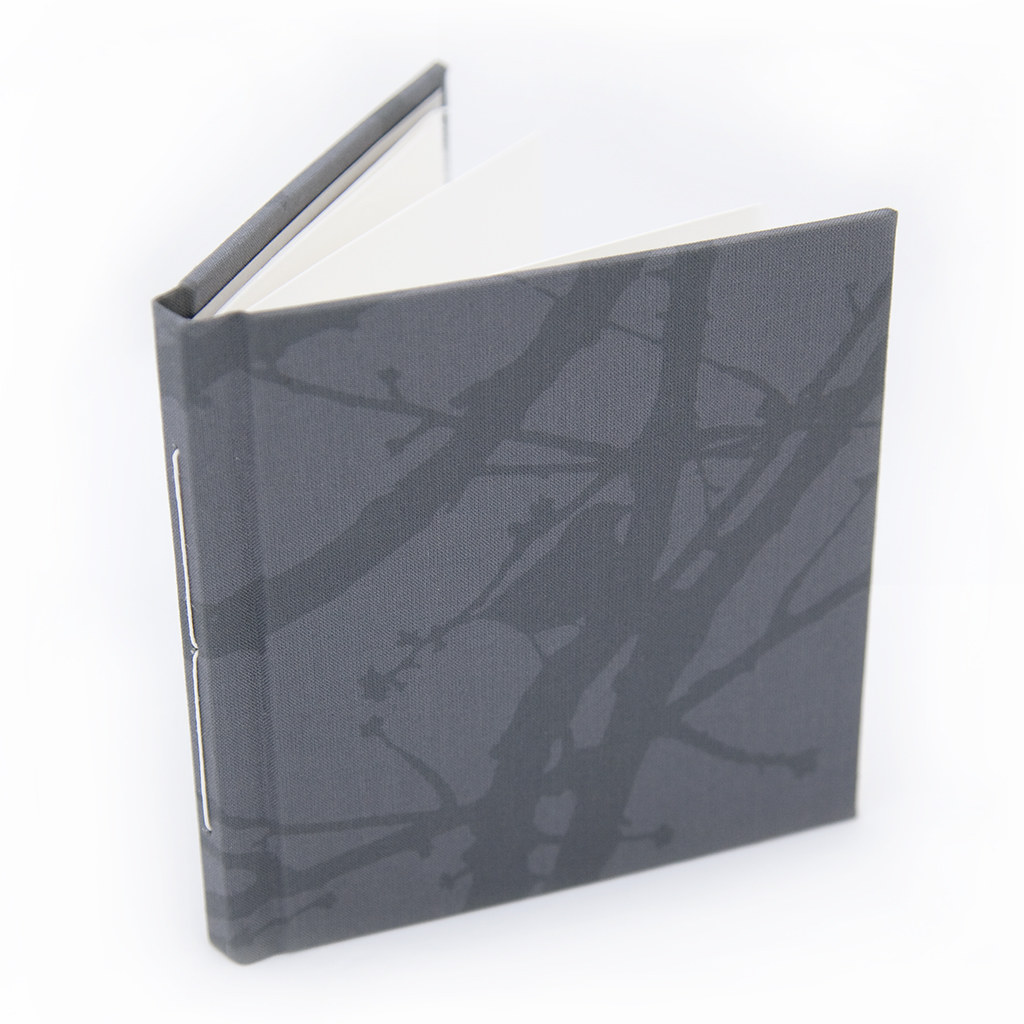 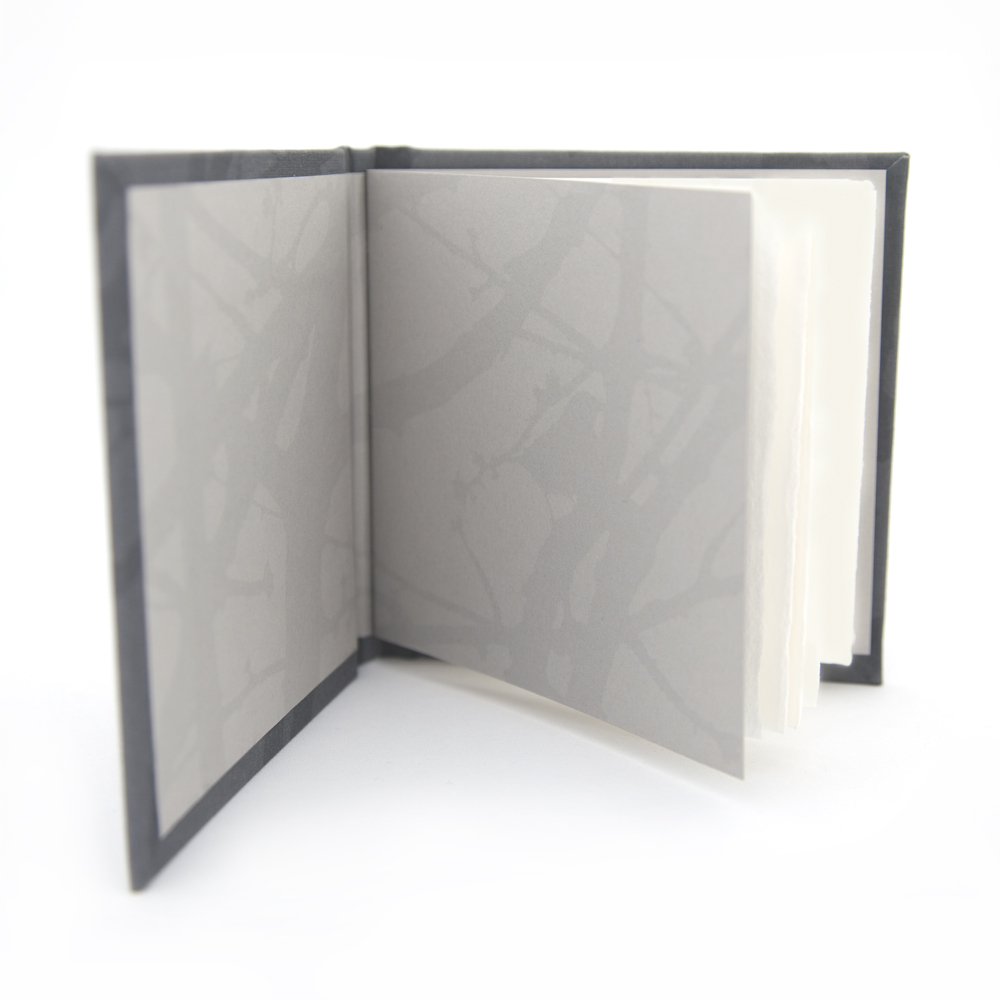 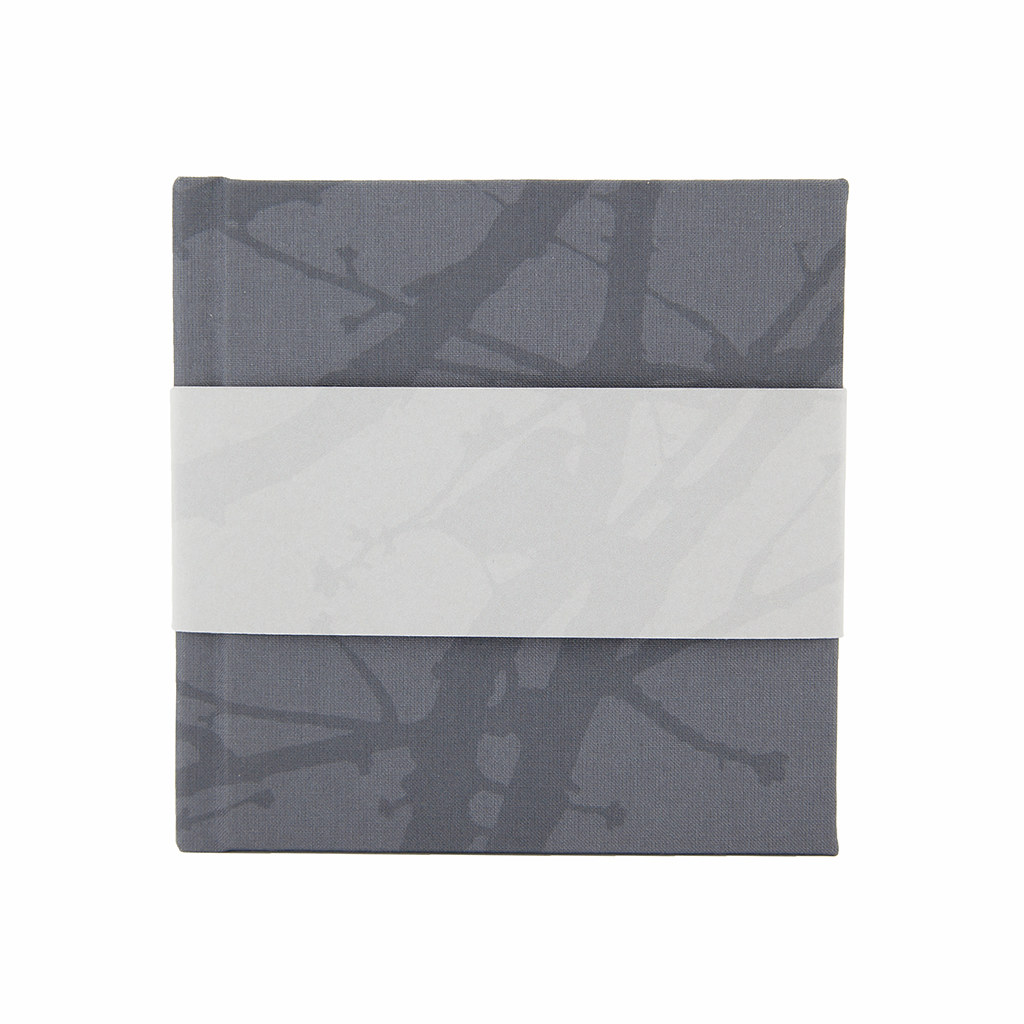 I also used the image to make a flexo plate print when I attended a Letterpress Course at UWE – also in 2011. (Which I had almost forgotten until I came to write this blog post). 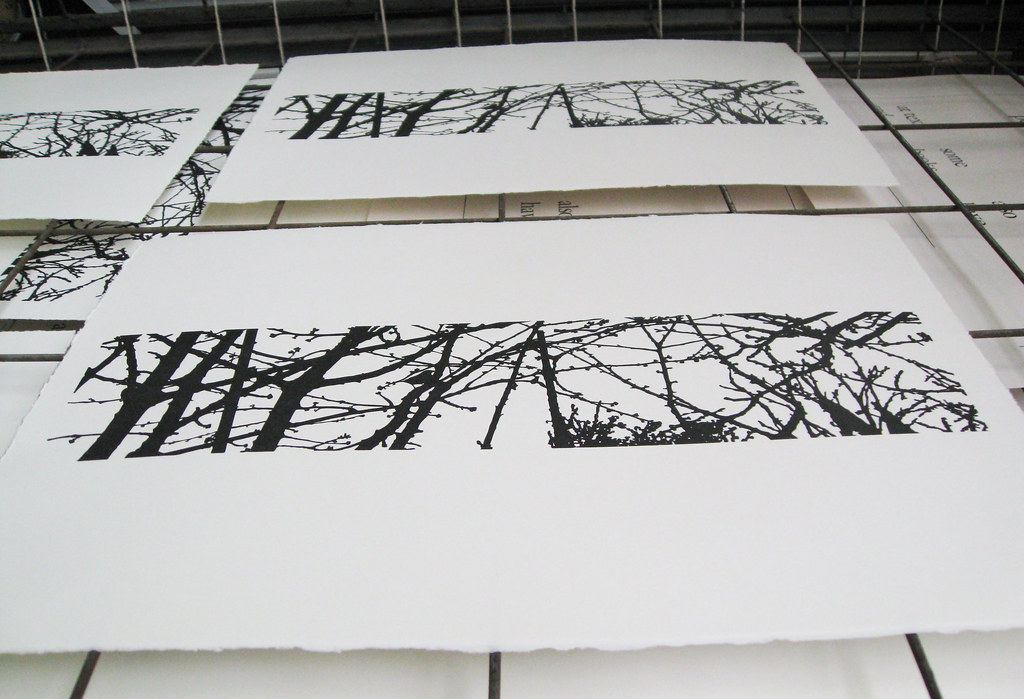 It was in the back of my head for a long time – that I wanted to make a rubber stamp from the image but I always thought this was impossible – and idle thought. I often write down ideas for work I would like to make or try to make – this was on the list for a long time – “one day?” I thought. Or maybe never, because it’s way too difficult?

Then at the end of 2015 I decided to give it a go. Something just clicked. Sometimes I start to work stuff out in my head and run over ideas a lot, but don’t actually do anything. It feels like my brain is silently processing this in the background and when it clicks that is due to the completion of this processing 🙂 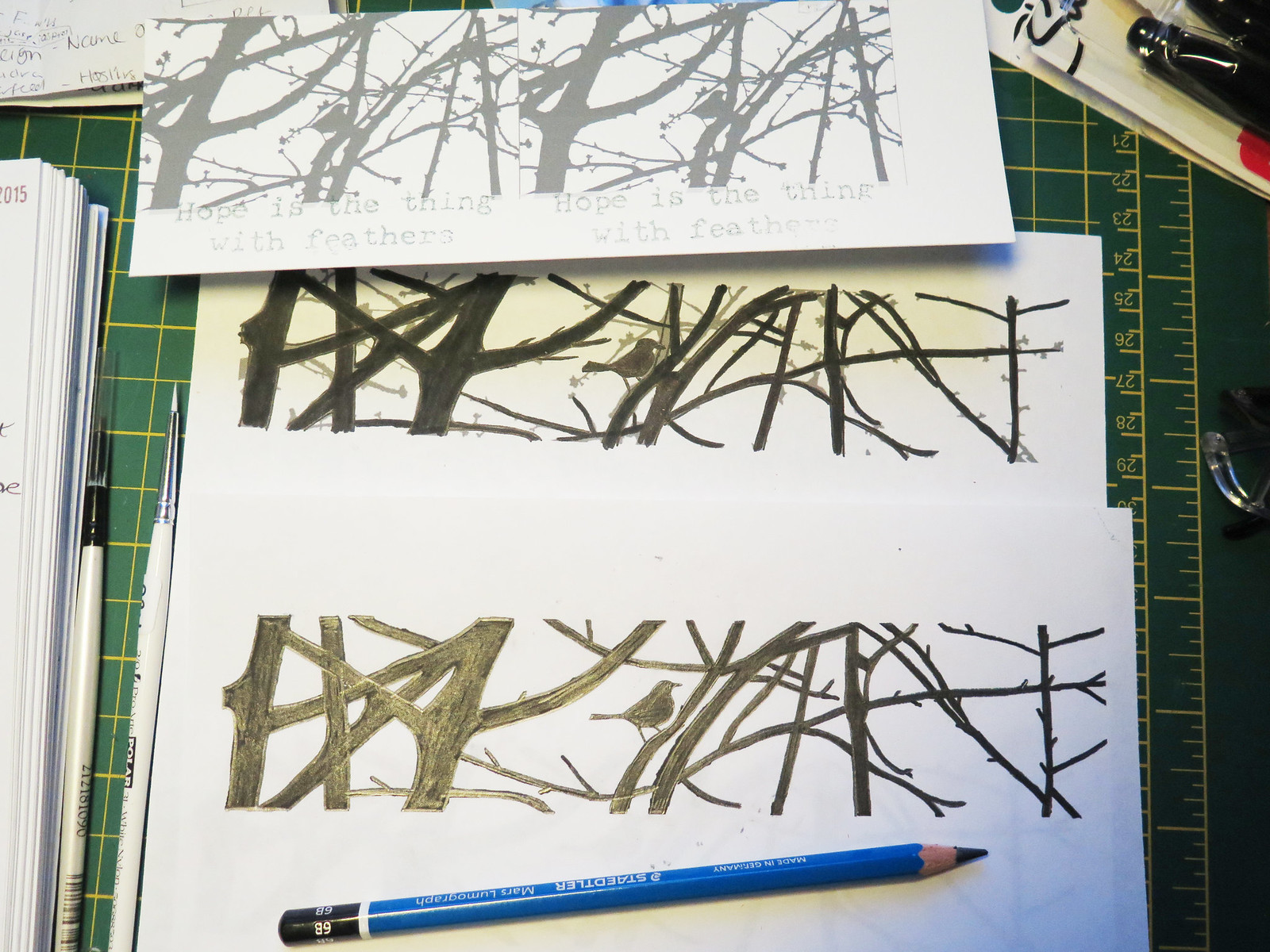 First I started to simplify the image and then re-draw over it. I then drew over the final simplified image in pencil and put this on the rubber (EasyCarve). At the time I did it, this was the most difficult stamp I had carved. Mainly in terms of getting my head around how all the branches were interlinked – what I should be cutting away and what I should leave behind. Once or twice I felt I was loosing the plot with this and was afraid I would cut off the wrong bit and totally mess it up. 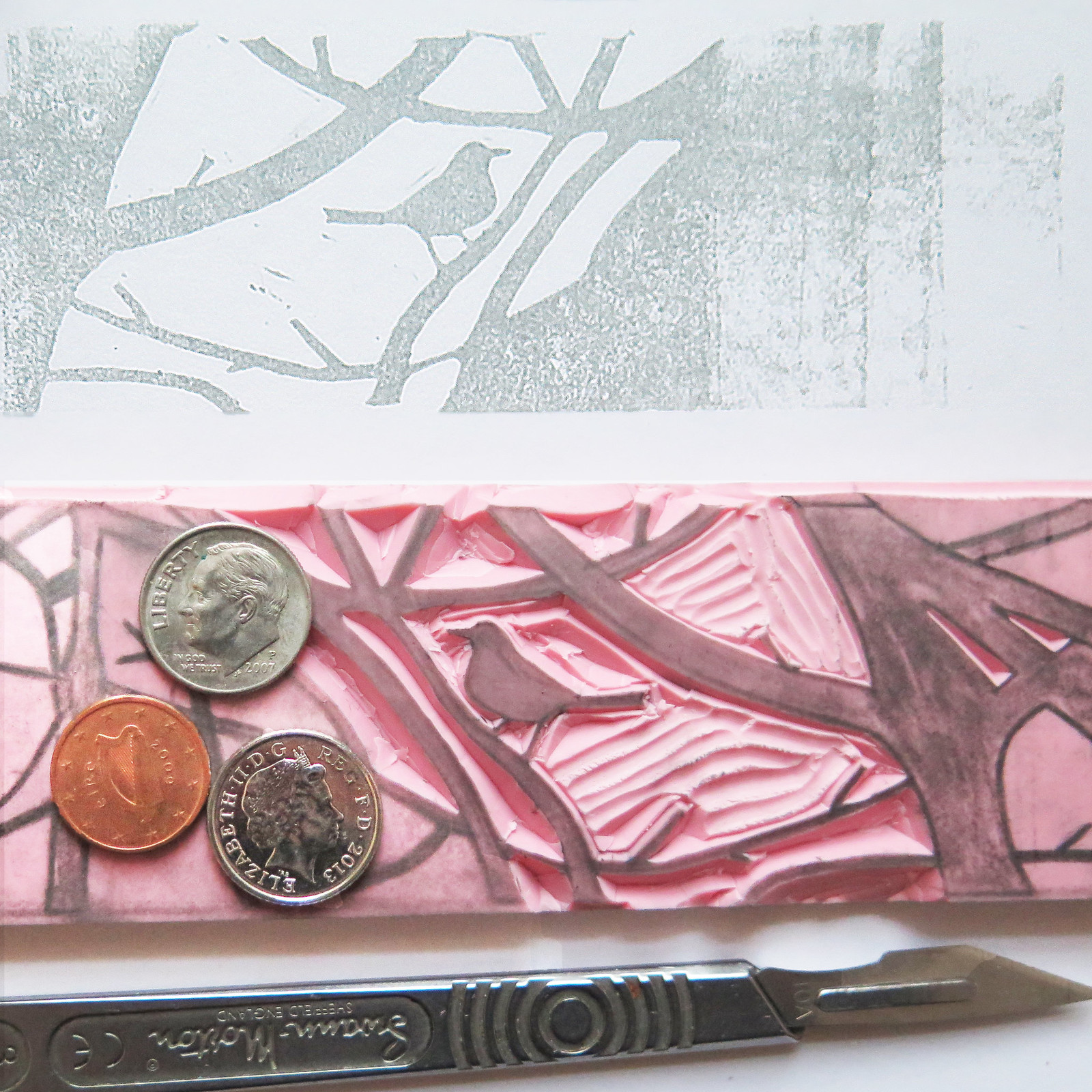 Once it was completed and printed I decided to use it as my banner (on Blogger) . This had not been my original intention – I just wanted to try to make a rubber stamp from the image with no idea what I would do with it.  Then finally one day when testing it out on different papers I found an off-cut of grey card I had used for my ‘No Such Thing As Seagulls‘ Book. I printed it on this and thought – this makes a perfect bookmark 🙂

This one image was the start of something – little birds in my artwork – and soon they were everywhere 🙂 Giving me joy every day in my garden, on the way to work as I cycle,  in the park when I feed the crows,  and finally in my artwork.  It was also the beginning of my addiction to making rubber stamps.

I hope I can translate my love for birds and the joy that they bring into my work. I love the whole stamp making process and when I see the bird appear as I carve (when making a stamp) it always makes me smile.  This reminds me of another thing I love about rubber stamps – it is a very forgiving process – the original photograph does not have to be amazing quality.  My crow stamp was made from a photo which was very out of focus but I loved his stance and was determined to use my own image for the drawing. 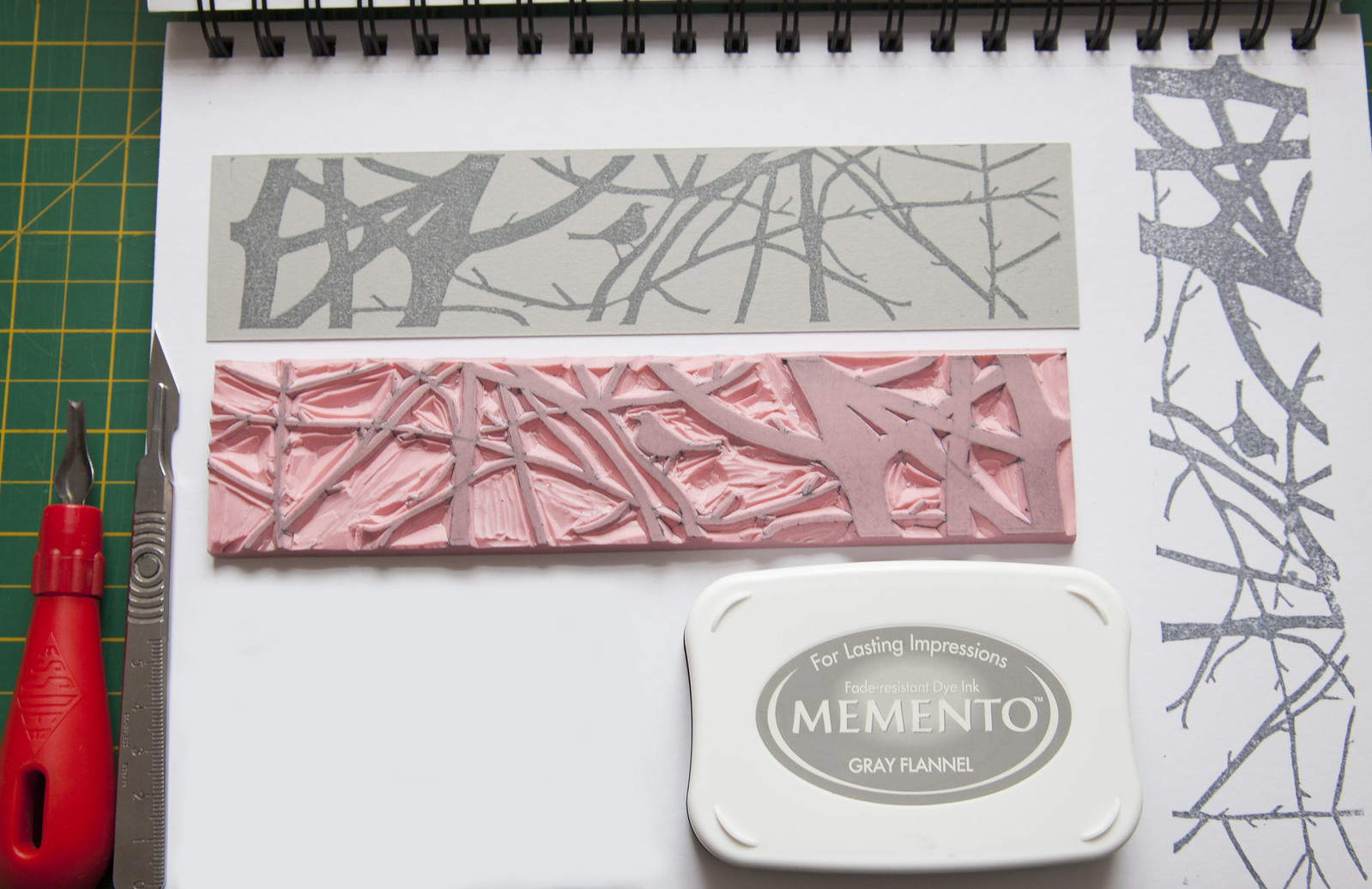 So an underexposed photograph that was written off became a very important image for me. I have since remade the original Blackbird Stamp and currently use this as my website logo and on my business card. I would not describe myself as a very religious person but the words – the stone which the builders rejected has become the cornerstone – came to mind.

I love the times when something which has been forgotten/neglected in my head comes to life. And shows that a part of me has been working on it all along.
And I also love your blackbird.
Thanks for showing part of the journey.

Thanks. It is funny how our brains work sometimes 🙂 I wasn't sure how much of this story to share – it was a bit of a long one 🙂