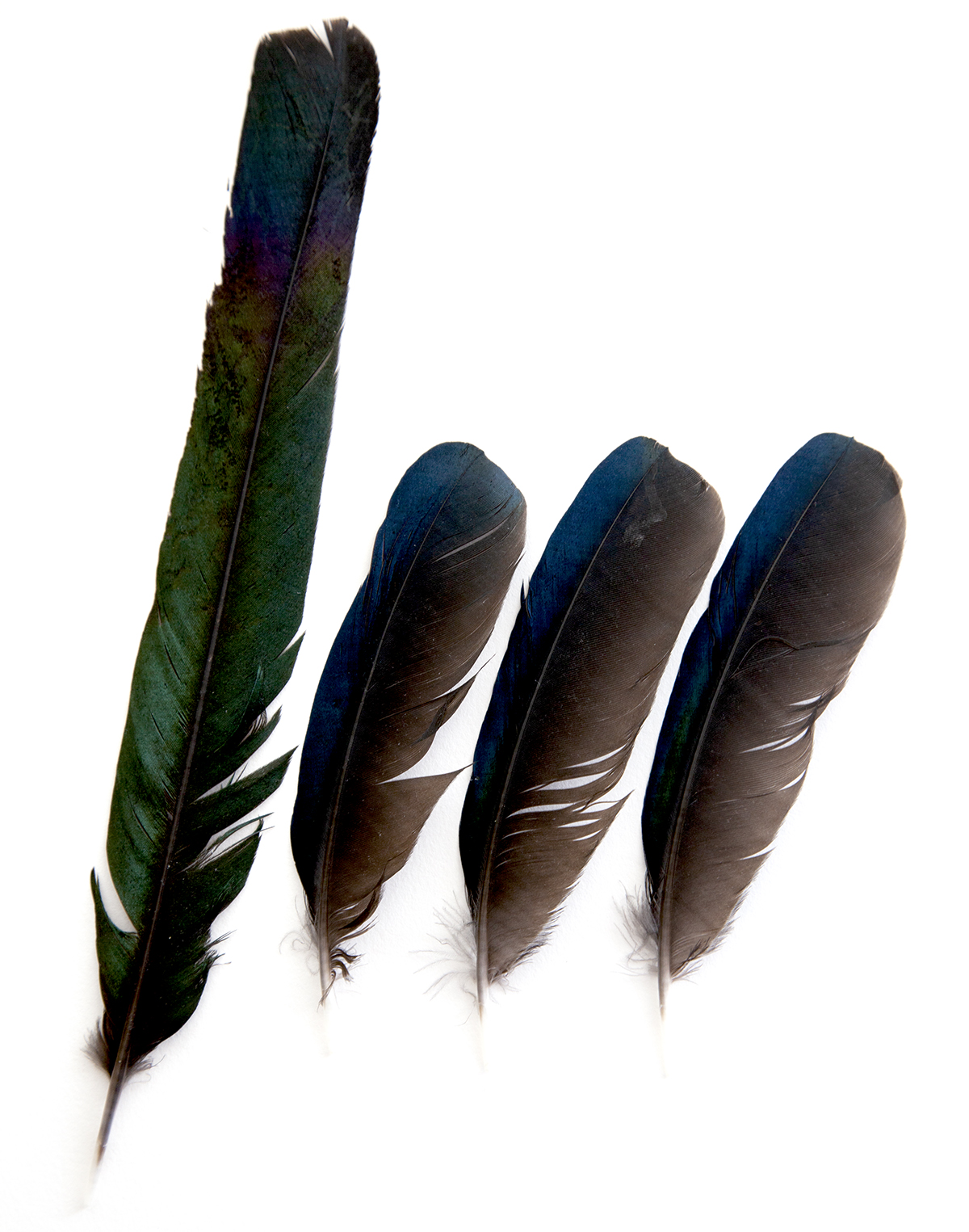 Please see comment below from Lucy. I realise now I was mistaken, I have double checked the Feather Atlas and found this page – Magpie Feathers.  Thank you Lucy 🙂

Two years ago today I found the first of these 4 Raven Feathers – the largest one – and then the 3 smaller ones the following day. From the way they were scattered and damaged it looked like some kind of fight probably with Crows or Gulls – it felt vaguely upsetting – I know Ravens can be nasty but I felt sorry for it.

I have been collecting found Feathers since 2005 – mainly Gulls and Crows and was fairly certain straight away that these were not Crow Feathers. I believed them to be Raven Feathers by size and appearance. They were much bigger than crow Feathers and had (and still have) a beautiful iridescence – a website called The Feather Atlas confirmed that they were indeed Raven Feathers.   I can’t explain it fully but it felt hugely significant – so I asked the Internet what it could mean – the answer?

When someone finds a black feather it means the guardian of their soul is near and also reminds you that you are not facing the battles of life alone.

Then followed a bumper period of over 6 months of finding Feathers – this went way beyond anything I had experienced before. Almost every day (sometimes twice a day) they were right in my path, I couldn’t avoid them, I almost stepped on them, sometimes I laughed – it was so blatant. It was mainly Crow and Gull Feathers, but also among them was my first Peregrine Falcon Feather.

They could be annoying (Gulls) or humble (Blue Tits) birds – in other words – the ones you least expect – there for you to brighten your day with a beautiful simple song (Blue Tit) – or comedic antics (Gulls) – and to cover you path with Feathers.

I view ALL birds (including the pesky pigeons) as feathered enchantment.
I will admit to a huge weakness for ravens though – such intelligent, beautiful, family minded birds.

Feathered Enchantment – that is one of the most beautiful and perhaps one of my favourite descriptions of Birds – even pesky pigeons 😀 I didn’t realise Ravens were so Family orientated too – thanks for sharing this. Further research will be required – even though I possess their Feathers, I must admit I know very little about Beautiful Ravens.

Hello, I am an ornithologist and just stumbled across your website while researching raven feathers, as they have a distinctive odour like a Catholic Church incense! Your beautiful feathers are from a magpie, though – the long one is a tail feather, the 3 others from part of the wing. Where did you find them, they are gorgeous!

Hello Lucy, thank you for taking the time to comment and let me know that these are Magpie Feathers. I have double checked the Feather Atlas and updated the title of this post 🙂 I can see now looking at the photo on the Feather Atlas (I have added the link to the post above) that photo on there is a much better match for the feathers I found.

Because they were so much bigger than the Crow Feathers I had and Ravens had been seen in this area I presumed they belonged to a Raven – I should have measured them too. The feathers were found in Park Place, Cardiff and Ravens have nested nearby on a Cardiff University Building.

It is a little disappointing they are not Raven Feathers but I love Magpies too and they are beautiful. Thanks again 🙂 All the best, Angela.