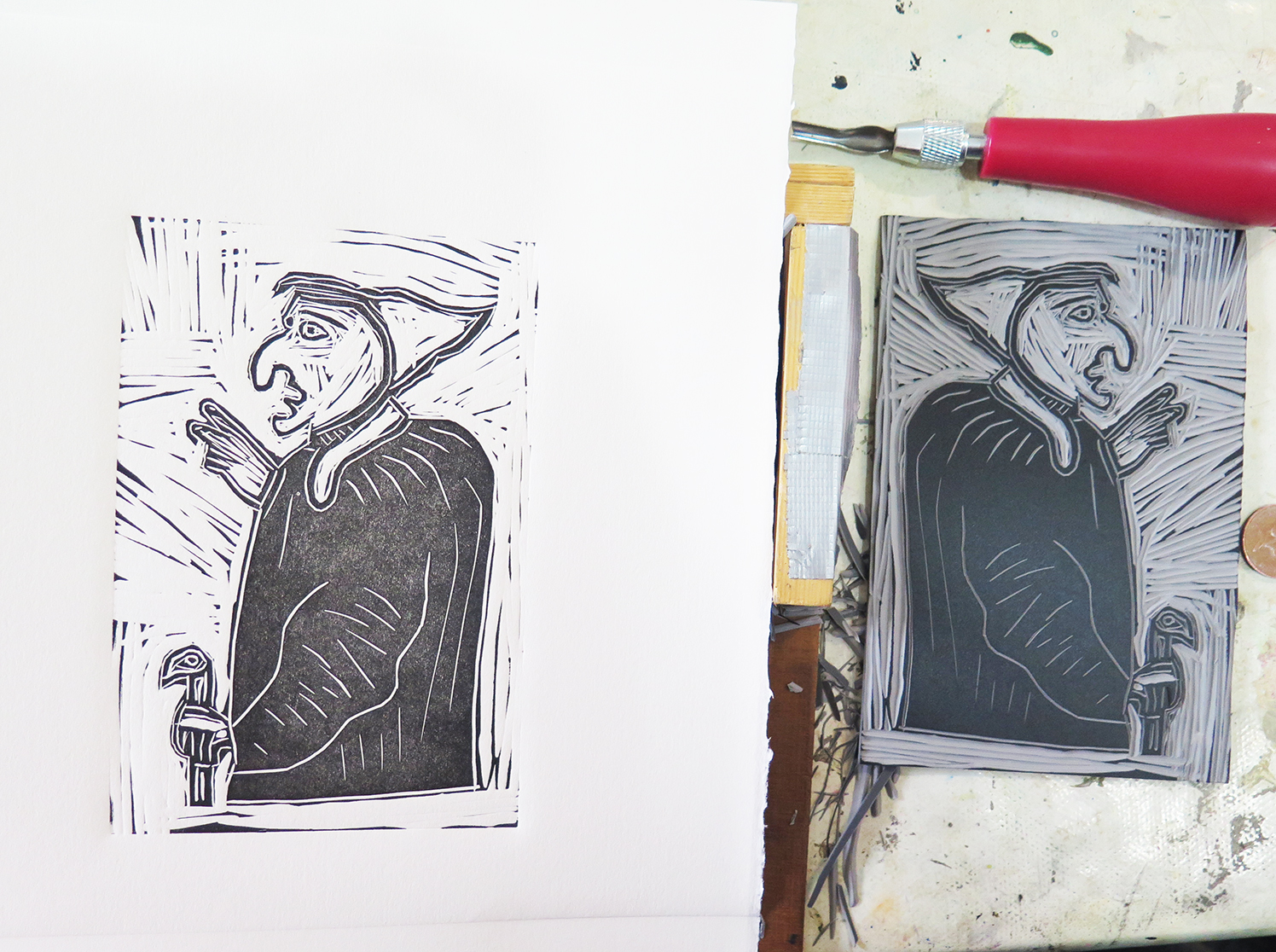 To say I’m a bit behind with some of my Blog Posts is an understatement.  I made this image on a Lino Print Course in June this year at The Art Workshop in Rhiwbina, Cardiff.

Why Mother Shipton? I did a Broadside Ballad Rubber Stamp Workshop at UWE, Bristol last year – in my research I found a lot of the Medieval Broadside Ballads were about Witches. I bought two of the Books we were shown for inspiration – Murder and Witchcraft in England, 1550-1640, As Recounted in Pamphlets, Ballads, Broadsides and Plays by Joseph H Marshburn and also Chapbooks of the 18th Century by John Ashton.

I loved the descriptions of the Witches.  According to a Chapbook called – The History of Mother Shipton – her father was the Devil, and she was born in 1488, in a violent storm of thunder and lightning.

The strange physiognomy of the infant frightened the gossips; its body was long, and very big boned, great googling sharp and fiery eyes, and unproportionable nose, full of crooks, turnings and red pimples, which gave such light that needed not a candle to dress her by; as it was likewise observed that as soon as she was born, she fell a grinning and laughing after a jeering manner; and immediately the tempest ceased.

The images in the Chapbooks and Ballads are mainly woodcuts, I became fascinated – they were also screaming Rubber Stamps at me.  I wanted to make some prints from my favourite images, but some seemed too large for rubber stamps – I also thought Lino Print would be a complimentary process (to rubber stamps).  I had a brief introduction on my  Art Foundation Course many years ago and have wanted to try it for a long time now – so I chose an image of Mother Shipton to work with.

Our Tutor was Jackie Shackson who was extremely knowledgeable, helpful and encouraging.

I mistakenly thought that Lino Print would be just like rubber stamps using different tools and cutting material – but it wasn’t.  I found it hard to get  my head around cutting the lines.

I know some artists use lino tools for rubber stamps but I mainly use an NT Cutter – sharp scalpel type blade.  This involves making 2 cuts – the first at an angle away from the line you are carving and the second a few millimetres away from this line at the opposite angle to create a V.  This will create an outline – you can see it in the stamp below (Toad Image for my book Invisible  – Redesigning The Medieval Book). 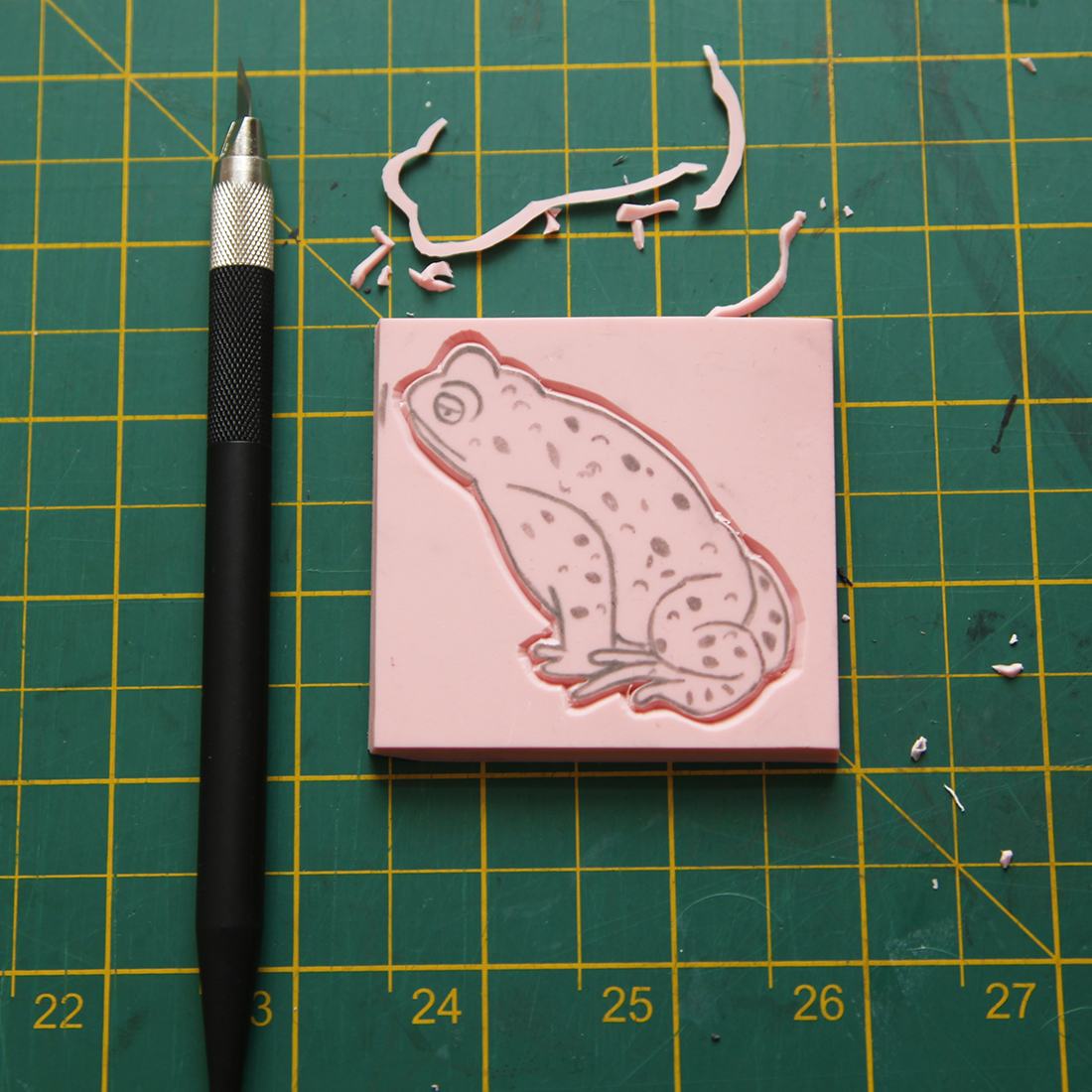 With Lino you would just cut this line once with a tool that creates the V.  I find I can get more control and precision with the NT Cutter Tool (pictured above). So as I said, it took a while for me to get my head around cutting lines in this way.

All in all I was very pleased with my print and am looking forward to doing some more Witches!  I would also recommend  The Art Workshop which is run by Genevieve Loxton who was very helpful when I was booking the course and also on the day.

Finally, I found that our tutor Jackie and I had a shared love of Crows and we also had similar experiences of raising an abandoned chick (mine was a gull – her’s was a crow). You can read the story of Ron on her website and also see her lovely Artwork here

How lovely to see another post from you (decidedly better late than never).
I love your work (always) and look forward to seeing more (in the fullness of time).
I share your love of the corvid family too. Such intelligent family minded birds.

Thank you Elephants’s Child 😀 I believe you have a lovely Corvid in your Blog Banner, but I am not totally familiar with the Species you have in Australia so I could be wrong.