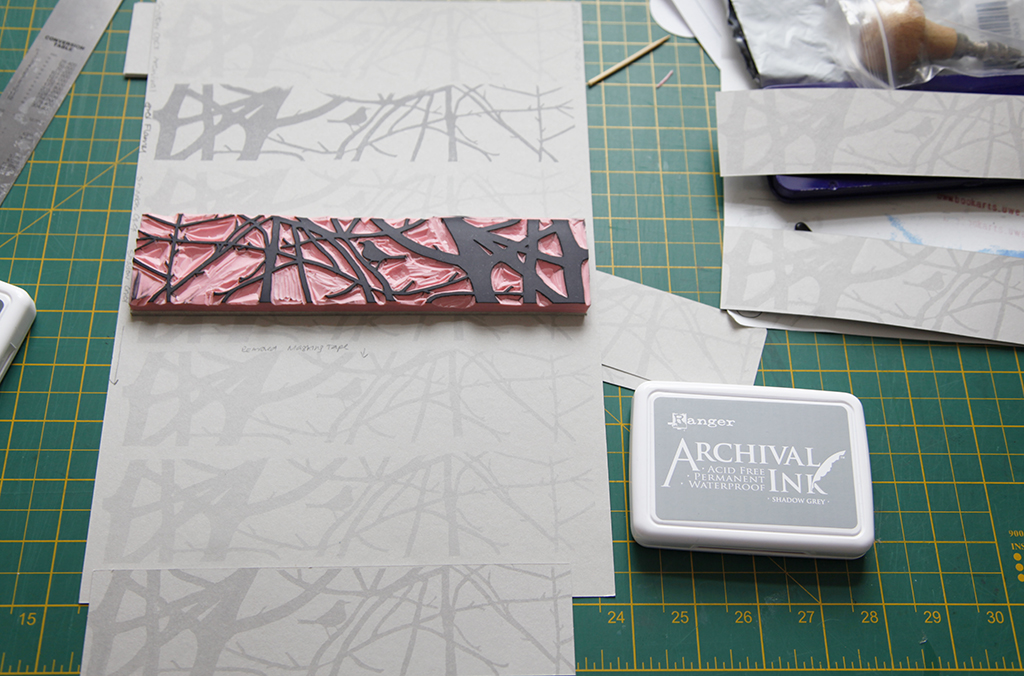 More Blog Post catch up. I took part in  Bookmarks XV: Infiltrating The Library System at the beginning of 2017. The Bookmarks project ran from 2003 to 2018. Here is the description from Book Arts, UWE Website.

This annual series grew out of an aim to encourage appreciation and awareness of artists working in the book format. Participating artists each produced an edition of 100 signed and numbered bookmarks which were divided into 100 sets; one full set being sent to each of the contributing artists and the rest divided and sent in distribution boxes to participating host venues around the world, for visitors to enjoy. Over the fifteen editions, the Bookmarks series of free artwork distribution visited 165 galleries, bookstores, workshops, centres, schools, museums and libraries in Australia, Brazil, Canada, Croatia, Cuba, Cyprus, Denmark, Egypt, France, Germany, Iceland, Ireland, Italy, Japan, The Netherlands, New Zealand, Norway, Poland, Singapore, Spain, South Korea, Sweden, Switzerland, Turkey, the UK and USA.

I had intended to take part for several years, when I saw that this was the final project and I also had a Bookmark (made at the end of 2015) I wanted to submit I decided to take part.

Hand printing 100 Bookmarks was not an easy task. I needed to establish a consistent method for printing the Rubber Stamp I had made and I also needed to decide what I would print it on.  I wanted to use Recycled materials and first thought of using off cuts from previous projects, but did not have enough for 100 Bookmarks.  After a lot of testing I eventually chose EcoCraft Grey Card, made from 100% reclycled materials. The card printed very well with a Ranger Archival Ink Pad, Colour: Watering Can, which is a lovely dark grey.  I couldn’t make up my mind whether to use the lighter card (Silver Grey) or the dark grey card (Mid Grey) and it was driving me crazy – in the end I chose both and printed 50 on light grey and 50 on the dark grey.

Now to the Printing –  I was unable to Stamp it in the usual way, it’s a long story.  I noticed that the Speedball Speedy Carve I had used was lower at left edge than the right. I have tried to show it in this photo (below) but it is hard to see.  If I hadn’t noticed this when I first made the Stamp (just after I had drawn the image on and started carving the bird in the middle) I would have thought it was the way I carved it.  I wondered if it was something else I could had done? I checked the whole block of Speedy Carve and noticed the profile of the block was lower at the edges (mainly the corners) – almost if it was squashed. It is very difficult to tell how and when this happened (before I bought it or afterwards), whether it was the way it was stored, the way it was cut – perhaps a blunt blade would squash/compress the edge when cutting it?

However, the next time I bought Speedy Carve I checked a few blocks and noticed some of them were slightly compressed at the edges, on the corners of the block. This may not have mattered too much on a smaller stamp, and may not have mattered at all if I didn’t need to stamp it 100 times.  I put cardboard on as a backing but this did not help – trying to get a good print every time was very difficult.

In the end I made a template in Photoshop with grey lines, cut the card, placed the card directly on top of the inked stamp and rubbed it with my Silicone Folder, which incidentally is one of my favourite tools – it does not burnish the card (or paper). Then I needed to cut 100 Bookmarks – having the template printed on the card made this a lot easier. I do not own a guillotine of any kind so did this with a scalpel and steel ruler. 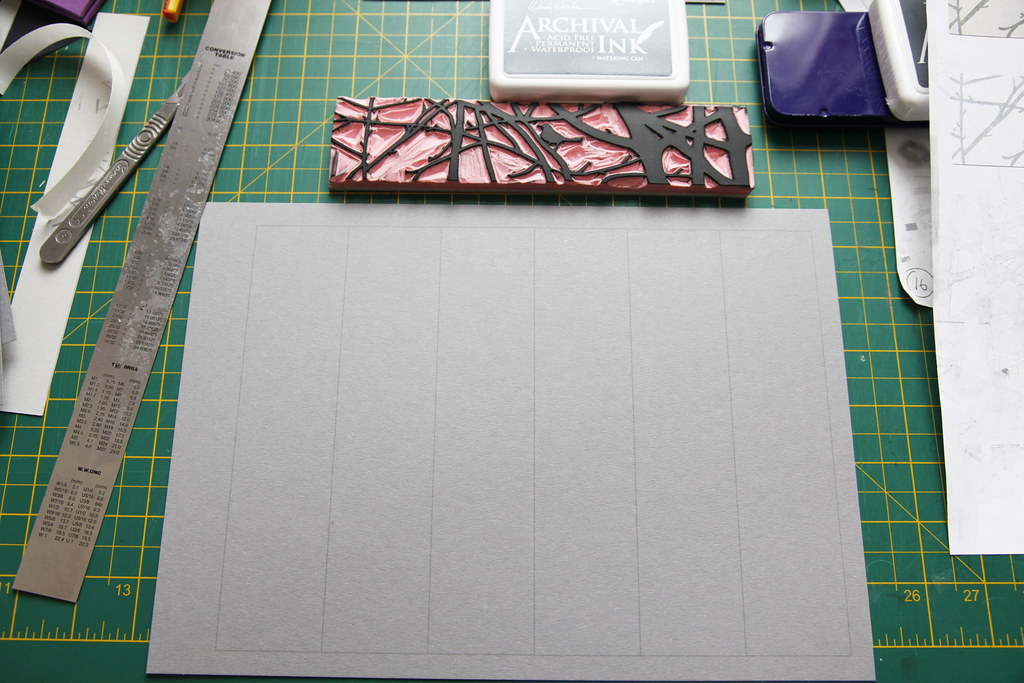 The Edition also needed to be numbered 1 to 100 and details of the Project printed on the Bookmark too. With the Project details we had the choice of doing this ourselves or having the project organisers (led by Sarah Bodman) do it. I decided to do this myself and made up a stamp with my Stamp Kit (Shiny S-200 DIY Printing Kit). You can see my rudimentary registration process in the photo below.  I did consider doing the back of the Bookmark on my printer, but in the end decided to use 3 Stamps and print it by hand. Compared to printing the front it was really easy and I thought I might have as much trouble if the Printer was in a bad mood and printed them all out of alignment.  I couldn’t stand the stress of a temperamental printer – at least if I was doing it myself I knew exactly where I was. 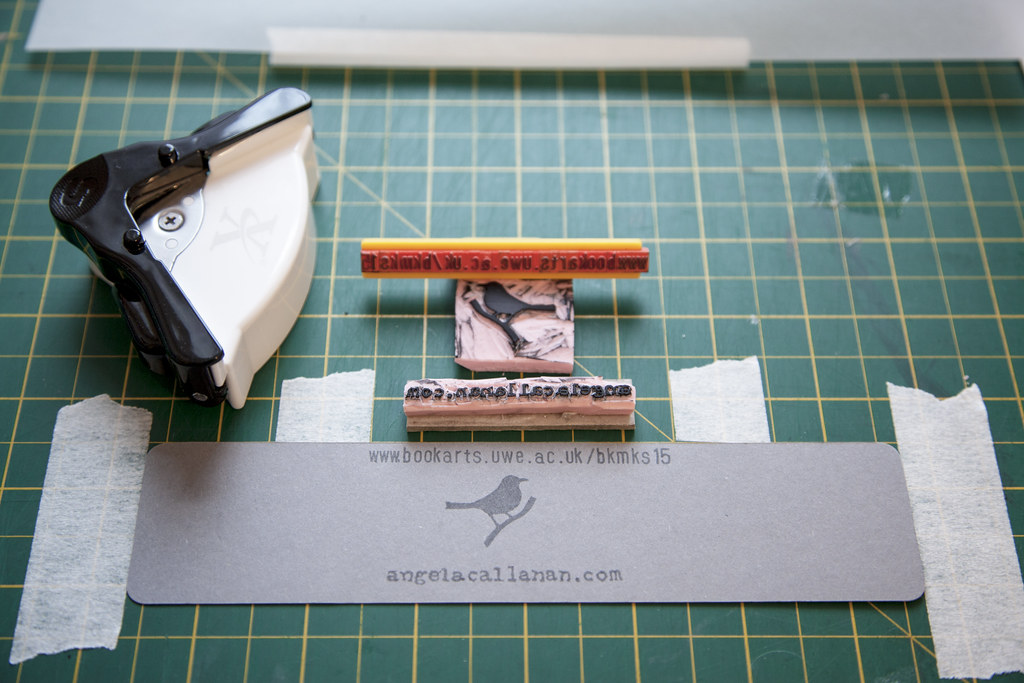 I also used my stamp kit for the edition numbers. This was a little bit more fiddly because I had to keep changing the numbers and if I was a bit tired I was afraid I would get the numbers mixed up – I managed to do it all without having to reprint any of the 100 Bookmarks. I would have liked to have done some of this on my Typewriter but this was impossible with the print method I had chosen. 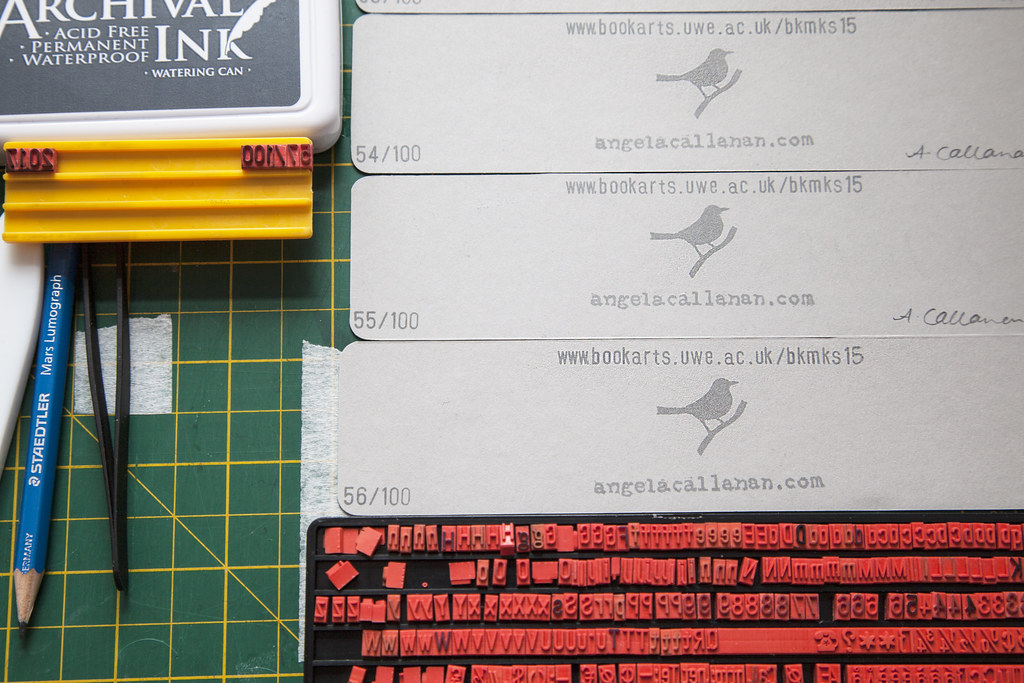 Finally, the 100 Bookmarks printed –  my shoulders were really aching after all this. 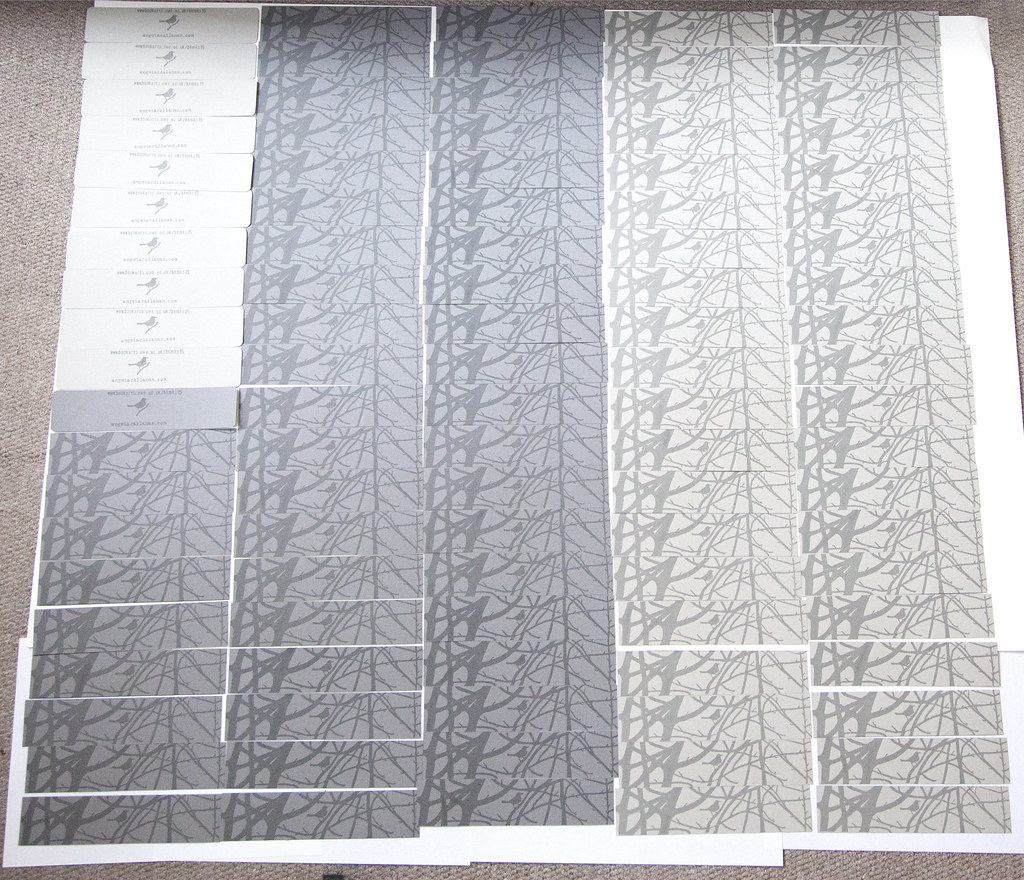 And my reward – a lovely Edition of Bookmarks from all the other participants. It is very difficult to photograph all of them – I hope this gives you some idea of what they looked like. 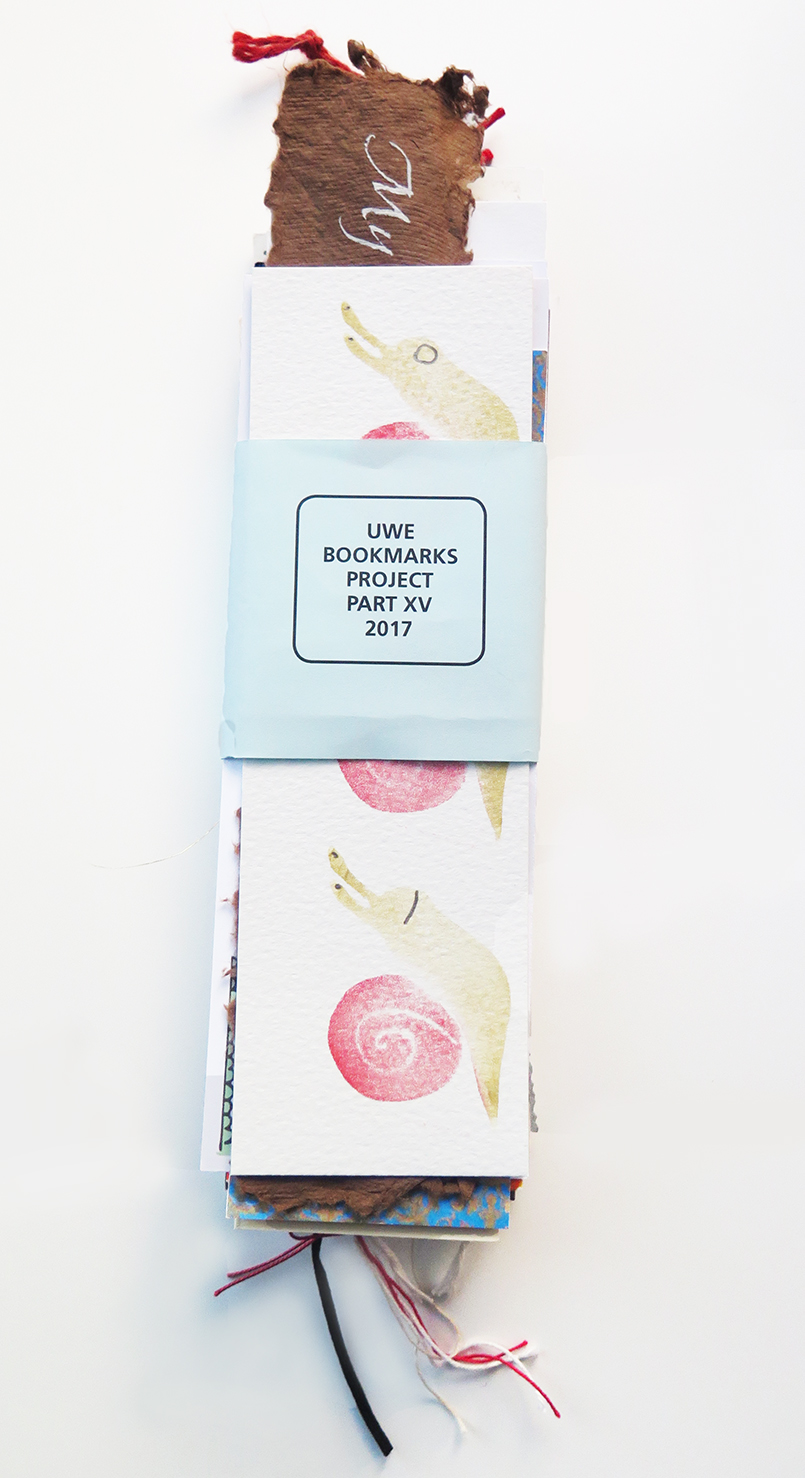 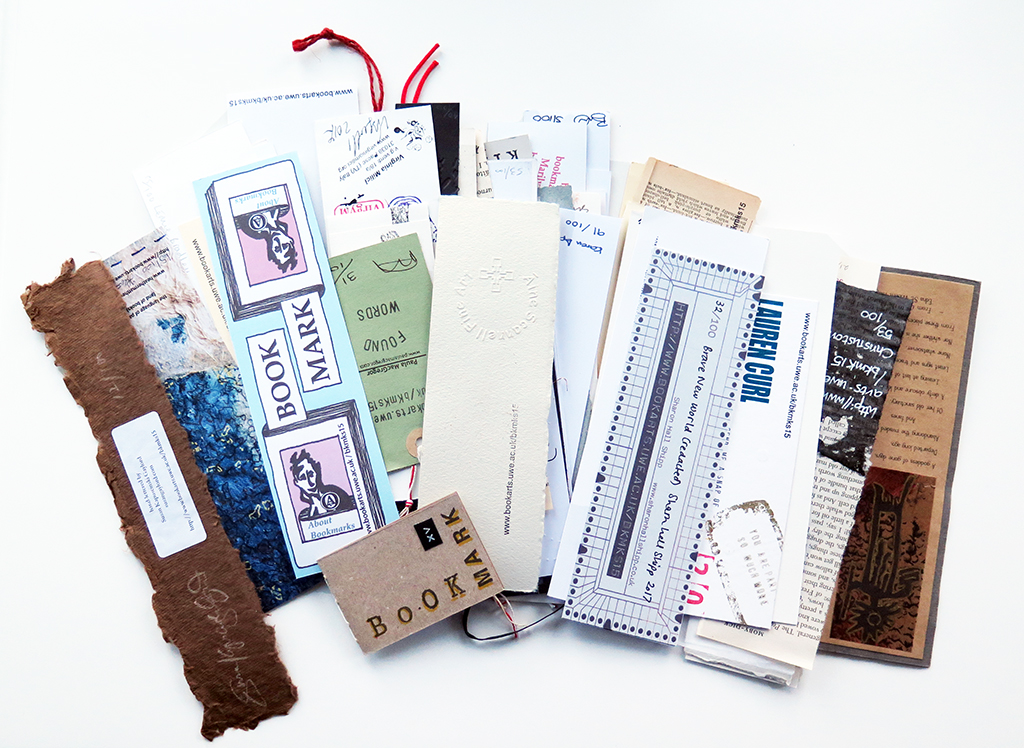 You can see an archive of the Project here and there is also a link on the UWE Website to International Friends of Bookmarks which I never knew existed.